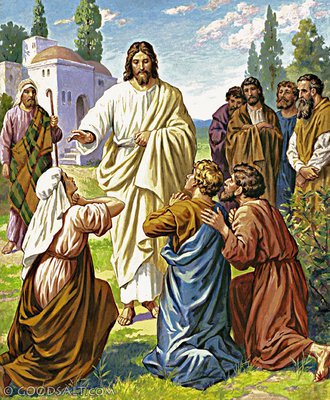 Today we have an appearance of those two outspoken disciples, James and John, the sons of Zebedee. We first meet them in the gospel of Matthew as they are with their father preparing their nets for fishing. As with all the others who left what they were doing to follow Jesus, one wonders about the reaction in their family. We never meet the father again but their mother shows up in the gospel of Matthew asking for privilege for her sons (MT 20) and today we have Mark’s rendition of that event (MK 10:32-45) where the brothers speak for themselves. It’s a rather shocking passage but maybe understandable if you consider the haughty behavior of their mother recorded elsewhere. Asking Jesus that they be “seated one at your right and one at your left in your glory” is not at all in keeping with the humility expected of the closest followers of Jesus. Even worse is the fact that Mark pairs that conversation with Jesus telling the Twelve what was going to happen to him in Jerusalem – his suffering, death and resurrection.

Maybe James and John weren’t really listening closely or maybe they just skipped over the suffering and death part because it seemed too impossible to consider, but their response held nothing of care for Jesus. It was all about the prestige they were hoping for as his companions.

While we admit that Mark’s is the shortest gospel and that it was written at least 30 to 40 years after the events described, one must wonder at the reasoning behind the juxtaposition of the two scenarios in this one passage. Was it a call for humility, pointed out by bad behavior? A call to attention, perhaps, so that we don’t miss the messages we are being given even in the everyday? Did it really happen as Mark told it, or were the brothers embarrassed by the arrogance of their mother in Matthew’s rendering? Certainly this is all conjecture but it does give one pause.

For me today it’s all about our approach to God in prayer. Awareness of “the bigger picture” of our lives, humility, trust and love ought to guide our desires as we do not speak for ourselves alone but for the good of the whole. Ultimately, wrapping all of our prayer in a mantle of surrender to the wisdom of God will assure what is best for us, even if we can’t see it in the present. And that, it seems, is the only way to live. 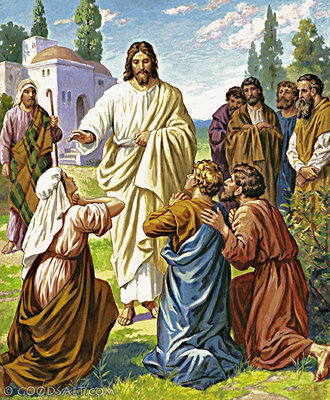 Today’s lectionary readings seem to point out two basic attitudes to life. I often smile when I read the text from 2 Corinthians (4:7-15) where Paul reminds me of the play when the “Unsinkable Molly Brown” sings (as the Titanic is sinking), “I ain’t down yet!” Paul says, “We are afflicted in every way, but not constrained; perplexed, but not driven to despair; persecuted but not abandoned, struck down, but not destroyed…” He is so full of zeal for the mission of Jesus that nothing can stop him. I am always amazed when I read of his travels in The Acts of the Apostles, knowing that a trip in his day has absolutely no comparison to mine. What took Paul months on the sea or overland might cost me a few hours on a plane. Paul’s attitude was that of a consummate optimist; he was willing to suffer anything for what he knew of Christ and wanted to share.

The gospel (MT 20:20-28) shows us something different with which we are quite familiar in our “dog-eat-dog” culture. Enter: the mother of the sons of Zebedee, an over-zealous parent who has obviously not learned the disasters that can afflict spoiled children. She approaches Jesus with the wish – no, the demand – that her sons be at his right and left, the positions of power, when it comes to sitting in the kingdom that she presumes he will establish. Not only were she and her sons totally mistaken about the mission of Jesus but they then had to deal with the other ten apostles who were indignant about the way they put themselves forward. Getting all you can of power or esteem or money is a prevalent attitude in our time and culture but is definitely not the way those who seek a spiritual life view right living.

Jesus is clear in his assessment of this situation and in his response both to the Zebedee family and the other apostles, saying, “Whoever wishes to be great among you shall be your servant; whoever wishes to be first among you shall be your slave.” Paul got the message and maybe the Zebedees eventually did too, since it appears they remained in the company of Jesus whose closing remark in this text is a good lesson for all of us: “The Son of Man did not come to be served but to serve…” 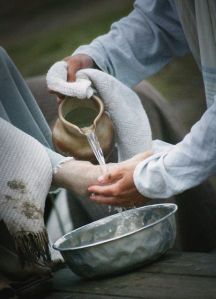 We’re at the beginning in our country of a political election cycle that is unusual in the number of people who have declared their candidacy for President of the United States. There are, at last count, 17 people who have entered the race. This number will be winnowed shortly as televised debates and state primaries are held – and then there is the question of money. It is impossible to win an election here these days (even to lesser positions in state and local elections) unless you have what has come to be known as a substantial “war chest” – in other words, a lot of money. One comes to wonder about the motivation of candidates; is their overarching desire for power or service? It’s never as simple as that, of course, but it’s necessary to listen deeply to not only the messages but also the actions of candidates throughout their lives in making decisions about the values they hold and their fitness for office. The witness of key people in the life of a candidate can also give a sense of who the person has been in life re: authenticity and humility – two qualities harder to determine as “the race heats up.”

The mother of the sons of Zebedee was a politician – direct and to the point. In today’s gospel (MT 20:20-28) she approaches Jesus wanting to ask him something. She obviously has not been listening very well to his preaching about humility and service because when Jesus asks her what she wants she replies: “Command that these two sons of mine sit, one at your right and the other at your left, in your Kingdom.” Jesus assures her that she has no idea what she’s asking; his “kingdom” is not about worldly power first of all. He turns to her sons (who should have been mortified at the request, I think) and asks if they “can drink the cup” that he is going to drink. They have no idea either of what he’s talking about but, feeling the sense of entitlement that they have obviously grown up with, they respond, “We can.” The other apostles are predictably indignant at this display of hubris and Jesus delivers a wonderful cautionary speech that could be instructive today for all of those seeking public office (or leadership position of any kind) and for all of us. He tells them: 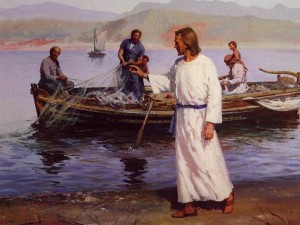 Today is the first day of the first week of what some Christian Churches call “Ordinary Time” – which might be construed as what the world is like after all the Christmas hubbub is over and the best of the merchandise is gone from the stores. Actually though, it is really nothing like that unless we look at the baptism of Jesus which we celebrated yesterday as an end rather than a beginning. “Ordinary” in Church-speak doesn’t mean the opposite of extraordinary. It comes from a Latin word, ordinalis, which refers to numbers in a series and from which we get the word order, thus indicating the ordered life of the Church between the major seasons of Advent, Christmas, Lent and Easter. It might be akin to “It’s three weeks till school is out for the summer” but doesn’t mean that there won’t be great things learned in the interim.

Today then, we begin with chapter one of the Gospel of Mark which tells us that John the Baptist has been arrested (a story for another day) and Jesus has begun walking about preaching. It’s often frustrating that the gospels aren’t more forthcoming with details about the events. Today, for example, has this news.

As he passed by the Sea of Galilee,, he saw Simon and his brother, Andrew, casting their nets into the sea; they were fishermen. Jesus said to them, “Come after me and I will make you fishers of men.” Then they left their nets and followed him. He walked on a little farther and saw James, the son of Zebedee, and his brother John. They too were in a boat mending their nets. Then he called them. So they left their father Zebedee in the boat along with the hired men and followed him. (MK1:16-20)

Doesn’t it make you wonder if there was any conversation in between the summons of Jesus and the responses of the fishermen? I know it wouldn’t be very economical to have all the detail (the Bible is already a very big book!) and the stories were not written down until much later, Mark’s being the first gospel that didn’t appear until sometime in the 50’s or 60’s. I wonder, though, about what appears to be an impulsive decision. I have many questions. Had they heard about Jesus before they saw him? Were they unhappy as fishermen – some of whom at least – and probably all – in the family business? What did Zebedee think about all this?? How old were they anyway? Was the presence of Jesus so compelling that it was impossible for them to refuse? Didn’t they ask him any questions about what “fishers of men” might mean?

You get my point, I’m sure. Unfortunately, we don’t have more to go on from the text. Theologians have written much through the history of Christianity about the events that we find in the gospels as well as the meaning of the words that actually appear. We can only know so much of the truth of this scenario, but we would do well, I think, to reflect on our own history of response to Christ’s invitations in our life. I know that when I entered the convent at 18 years of age, I had a strong desire to give my life to God but I had little understanding (regardless of how sure I felt) of what would be called for as I lived the life. I think this is true of most people, even if not circumstantially the same. Those who “go into the family business” might have a clearer idea at the start but the world continues to change at such a rapid pace that there is little clarity about the future these days. The evidence of the gospels tells us that most of those chosen in those early days as the closest followers of Jesus – the ones who are named anyway – failed him occasionally along the way but were able to forgive themselves and be forgiven so as to remain faithful to their commitment to the end of their lives. And I’m sure they understood then what that meant in a way that they could not even have imagined that day on the beach.