I was just looking at a new website – new to me, I mean. It’s called Bombas. Maybe you’ve heard of them. They make socks and for each pair they sell, they give one pair to a homeless person. They say that the one item of clothing most needed by poor or homeless people is socks. At the moment their website says that they have given away 40,000 pairs of socks! (You see why I say it’s not new. I think they have been in existence for about five years, but still, that’s a lot of socks!)

Today I saw a new face of Bombas. It concerned their care for military veterans. I’m amazed at their organization and happy that I found it on the internet in a new way on this Veterans’ Day holiday. The Executive Director of Bombas, Marguerite Bachand, announced today Operation Dignity, a program serving at-risk veterans in their 20s, their 70s and every age between, providing them and their families with emergency, transitional and permanent housing as well as comprehensive outreach and support services, under the title, Operation Dignity. (You can find it on the internet.) Today is a great day to remember the service of our military men and women. If you are so inclined and able, why not give socks for Christmas this year? (…even order them today from Bombas!).

Perhaps the greatest gratitude you can give is through your prayer. Please join me throughout today – and beyond – in offering a bow of gratitude in the prayers we say for all those we know and those unknown to us who have given service to our country and the world. God’s blessing on our Veterans!

This day on which we remember all those who have served and are now serving our country in the armed forces has a complicated history. While I am not a student of the intricacies of our country’s history in wartimes, and did not live through the Great Wars ( WWI and WWII), I am the daughter of a WWII veteran whose stories were never about the war itself but always about the brotherhood that existed during the war and remained vivid throughout the rest of his life. There was never any talk about the tragedies of those days or what we now know as post-traumatic stress. The women who served during these wars were known mostly as nurses whose service was somewhat in the background – but so essential to the troops.

Things began to change after that. Beginning with the “police action” in Korea and brought to the forefront in Vietnam, questions of “Why are we there??” surfaced and politicization in new ways caused polarization as we wondered – and still do – about our participation in conflicts on the other side of the world. We have learned the downside of being a world power, and those making the decisions about that participation are not often those who are sent to serve.

As we face the repercussions of war in the modern world, we are called to support those who serve, especially those who have been physically, mentally or spiritually damaged in the process of serving. Whether or not we support the premise of the events, we need to see veterans as individuals serving our country and see to their needs going forward.

And we need to pray for veterans and their families who have been damaged by war. Regardless of our politics, we can all pray as individuals for individuals and families who will never be the same. Yes, that is something we all can do, and that is a debt we owe. 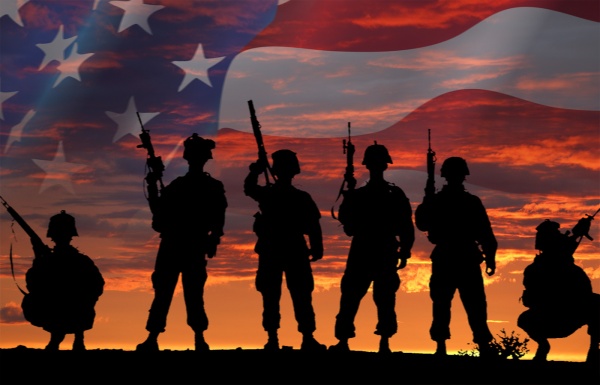 On this Veterans Day I think of my father, proud of his service in World War II while abhorring the thought and the reality of war. I think of those who protect us today from different kinds of enemies and those who keep the peace. I think of those whose work is in disaster areas near and far and all who have given their lives in service to our country. And I think of their loved ones. It is for all those and for the rest of us who are the beneficiaries of their service that I pray this anonymously posted prayer.

God of compassion, we pray for military personnel, offered for the sake of others and separated from family and loved ones. Care for them, meet their needs. Grant them courage, compassion, strength, and all they need for the living of these days. Sustain them through their every trial. Remind them of the humanity they share, even of those who are called “the enemy.” Through Jesus Christ our Lord we pray. Amen.