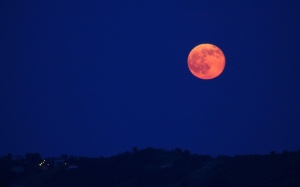 I get confused sometimes about the summer solstice. Is it the 20th or the 21st of June? Added to that this year was the title “Strawberry Moon” which I had never heard before. It turns out that I basically missed the whole (very rare) event as there was some cloud cover last night and it took me until this morning to read that the June moon got its name simply because it’s the season of strawberries in the USA. What I did not miss at 2:00AM, however, was a wild thunder and lightning event, with heavy rain drenching our bit of earth very quickly and moving on. I was awake just long enough to close my windows and to recognize the power of natural forces before I sank back into the oblivion of sleep. Maybe the storm actually lasted longer than I did in observing it…

Not drawn to the Scripture readings this morning, I opened The Gift: Poems by Hafiz, the Great Sufi Master. These are the poems I found on two successive pages. (My apologies to Hafiz and his translator, Daniel Ladinsky, for typing them here in prose form.)

SOME OF THE PLANETS ARE HOSTING The ear becomes alert when music says, “I am over here.” The eye goes on duty, becomes viable, when beauty whistles and points to her dress on the ground. God has sent out ten thousand messengers  announcing a great bash tonight some of the planets are hosting where the lead singer is God, Himself. But most of those courtiers have become drunk, got waylaid, disoriented to the hilt with such exalted news, and can no longer remember the time and the place. What does that have to do with you? Plenty. Hafiz will fill you in later if need be.

WHAT IS THE ROOT? What is the root of all these words? One thing: love. But a love so deep and sweet it needed to express itself with scents, sounds, colors that never before existed.

I guess I should try to pay more attention to this day. I wouldn’t want to miss another big bash!