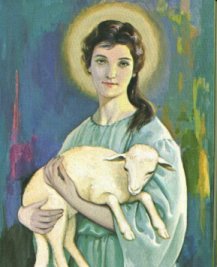 Today, as the Pharisees continue their attempts to trap Jesus in his disregard for the law (healing the man “with the withered hand” on the Sabbath) the Roman Catholic Church celebrates a 12-year old girl, saint and martyr for the faith. The story of Agnes  dates from the third century before Constantine ended the persecution of Christians. Legend has it that Agnes was a beautiful young girl whom many men were interested in marrying. Her refusal prompted one very disgruntled suitor to tell the authorities that Agnes was a Christian, whereupon she was sent to a house of prostitution, tortured and put to death. This situation put me in mind of all the girls and women around the world who are being sold into slavery by sex traffickers or who live in other abusive situations (even in this country) that we would protest as unlawful and morally untenable. There are many organizations and individuals whose outrage at these horrible situations have moved them to action on the part of such victims. My own community of the Sisters of St. Joseph is so committed. I am grateful for that and consider it my moral duty to continue to educate myself and others to these atrocious conditions, to pray for women the world over and to join as I am able in actions that will eradicate such unjust and horrific practices in our time.