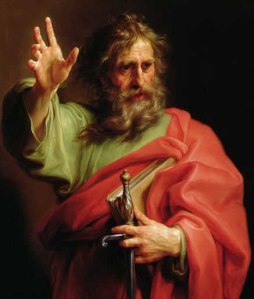 Today is the feast of the conversion of St. Paul, an event that in today’s world would be characterized as “doing a 180.” Paul, one of the most diligent persecutors of Christians was “blinded by the light” in a miraculous theophany. He could suddenly see nothing with his physical eyes so that he would turn inward and see with spiritual eyes the pain he was inflicting on people. His conversion, the total turning of his life to the opposite direction, was startling.

I find the inner exchange that he had at that moment with the Risen Christ quite interesting. Others saw the light but the voice that was only for him did not give him a command but rather asked him a question: Why are you persecuting me? In Paul’s account, (ACTS 22) he responds in the manner of a schooled debater with his own question: Who are you, sir? When the answer came that the voice belonged to Jesus, whom Saul was persecuting in the Christians, it seems that the ego that was Saul was smashed instantly as he answers with another question: What shall I do, sir? Humility entered with that question and the great apostle Paul was born from the enemy Saul. He needed to take the hand of his companions and walk in blind obedience for the next three days.

Paul was used to giving orders. I wonder how he would have responded if the voice he heard was one of commanding power rather than one that engaged him in a conversation. For the rest of his life, Paul was asking and answering questions in conversation with God as he went about spreading “the Good News” of Christ. That good news was the message of love and not condemnation that I believe Paul was blessed to understand in the way Christ treated him. Perhaps my interpretation of things is a bit far-fetched; being thrown to the ground by a flash of lightning certainly isn’t an amiable way to get someone’s attention, after all. I would argue, however, that it does point up the possibility that God treats each of us as loved in a way that we, as individuals, can understand. And that is, to me, very good news!