Saturday proved to be a great example of flexibility for the Sisters of St. Joseph here at our assembly. After having spent several hours at different times preparing for our 2-day meeting and thinking the agenda was all in place, we were thrown a significant but necessary curve that could have derailed the entire timeline. But it didn’t!

After some quick thinking in two brief meetings, a way forward was determined and smooth sailing was assured. I was reminded of that this morning as I read a reflection from Meg Wheatley called “Choosing.” She says, in part:

“These critical questions require a momentary pause, a little reflection. Rather than just striking out or being reactive to a bad day, we offer ourselves freedom…we’re not trapped by circumstances or fatigue. We give ourselves a moment to look as clearly as we can at the current situation. And then we make a conscious choice. Every day.” (Perseverance, p.59)

So step back a pace or two, if necessary, take a deep breath to recognize what benefit there might be in openness, smile and then go forward into the freedom of your day. See if it doesn’t surprise you with a good outcome.

Over 25 years ago now when I heard that there was a Broadway musical based on Les Miserables, the sweeping historical novel by Victor Hugo, I was nonplussed, to say the least. What happened to all the light and airy musicals of the earlier part of the 20th century? How could the epic novel be portrayed in just a night at the theater when it took forever to read – even in translation? And such a gloomy theme!

I was reminded of that feeling when I read today’s first lectionary reading – still about Jonah who never seemed likely to come to a happy ending. (JON 4: 1-11) After having been shipwrecked and saved from (or by?) the whale, but angry at God for not destroying the wicked folks in Nineveh, he built himself a hut in a shady place where God had even provided a gourd plant for him and sat down to see how God would finally punish the people of Nineveh. The next day, however, it seems that God was still trying to test Jonah’s mettle by sending a scorching wind and a worm to attack the plant. Jonah had had enough of trials and told God he would be better off dead. God keeps trying with Jonah who seems unable to let go of his personal distresses for the greater good so God finally goes direct saying the following.

“You are concerned over the plant which cost you no labor and which you did not raise; it came up in one night and in one night it perished. And should I not be concerned over Nineveh, the great city, in which there are more than a hundred and twenty thousand persons who cannot distinguish their right hand from their left, not to mention the many cattle?”

Unlike the play that comes to a glorious denouement, the book of Jonah ends with God’s question. I think it’s a genius move because it calls us to look at how we would respond to God in the same situation. What would you say? Would God’s challenging question wake you up? How would you feel? Don’t jump to a response; think about it. Even better: read the Book of Jonah. It’s very short and rather entertaining until the last paragraph. See what you learn from asking the deep questions that may arise from your reflections. Blessings on the search!

While not the gospel reading in today’s lectionary, there is a short passage in the Gospel of John (1:38-39) that I find heartwarming and particularly engaging. It imagines a more personal invitation to those who became the first disciples of Jesus than what we read in Matthew’s account when we picture Jesus walking along by the Sea of Galilee, calling to two sets of brothers with the command, “Follow me.” (4:18-22)

The set-up of the story is the same. Jesus is walking by the fishermen and something in them knows to follow him. As they do, Jesus turns around and asks, “What are you looking for?” They counter with the question, “Rabbi, where are you staying?” to which he responds, “Come and you will see.” And so they do. It was Andrew, brother of John, who is credited with that interchange and today the Church celebrates his willingness.

Had Andrew and “and another disciple” not been alert when Jesus walked by, they might have missed the opportunity of a lifetime, or perhaps it was just a little “test” of their fitness for the job. Some of us are probably more comfortable with Matthew’s remembrance of that moment. It’s sometimes easier to be told what to do rather than asking questions that might seem a bit invasive. The last line of the passage from John says, “So they went and saw where he was staying, and they stayed with him that day.” Their decision. A much more mature encounter, wouldn’t you say? 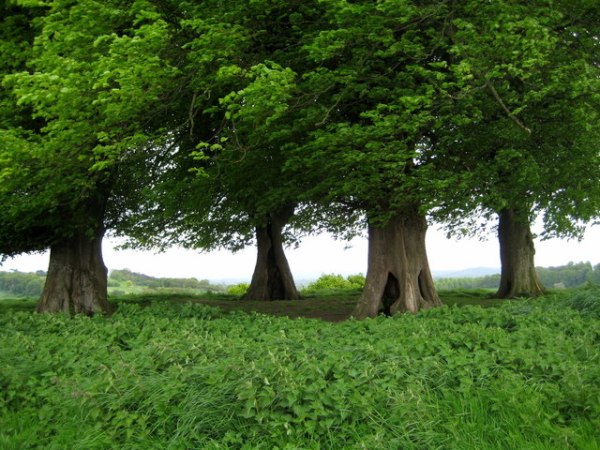 There are two adjacent ranch-style houses on our road whose owners each planted four trees in a row across their front yard. I have watched them grow over the years and sometimes wonder if it was the desire of the owners to have a lot of shade, to hide from the road or just to satisfy their love of trees. They have seemed to me as they’ve grown like a line of sentinels from one yard to the other. Because I am always driving when I pass them, I really don’t know if they are the same kind of trees; I just admire their beauty and their strength.

On my drive home early yesterday evening I was luxuriating in the lush green all around me (not much traffic on our road at 7:00 on a Sunday) when I was brought up short by those trees! Suddenly, after years of tiny incremental growth, they are mammoth and have totally obscured the houses! Today I wonder if I need to pay more attention to the obvious lesson that I have been getting on our own land and now elsewhere about what Teilhard de Chardin calls “the slow work of God” and Rilke describes as living the questions rather than being impatient to find answers. Sometimes it seems as if they have conspired with God on the same message!

I was not surprised this morning on opening the Jesuit prayerbook, Hearts on Fire, to find Teilhard’s words on the page before me. So once again I will try to slow down and listen carefully.

Above all, trust in the slow work of God. We are quite naturally impatient in everything to reach the end without delay. We should like to skip the intermediate stages. We are impatient of being on the way to something unknown, something new. And yet it is the law of all progress that it is made by passing through some stages of instability – and that it may take a very long time…(p.102)