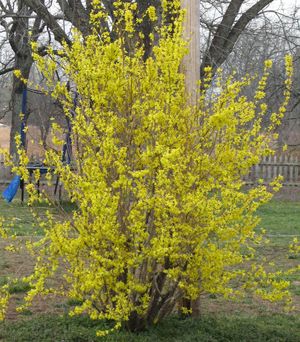 I learned a long time ago the necessity of pruning: that even though it may seem cruel to cut off any part of a plant, cutting it back may cause the possibility of a stronger and healthier plant in the long run. It was the tomato section of our garden that taught me that hard lesson many years ago. I learned what “suckers” were that summer and the fact that the longer you left them, the more they drained the energy of the whole – without bearing fruit themselves.

We have thirty overgrown and tangled forsythia bushes lining the border of our property, planted in honor of our mother from whom we learned to love their freedom and beauty. It is always a disappointment for me to see a forsythia bush clipped into a perfectly manicured spherical shape rather than the energy of one that has been pruned from the bottom (the advice of my cousin) and left to fly free in the breeze.

I have been woefully inattentive to our bushes over many years now, noticing their plight but not having the time or the energy to tend to them. The result has been lots of greenery (so I know the life force is still there) but no flowering or colorful vibrancy.

Yesterday I was blessed with a companion – younger and stronger than I – with whom I began the task of freeing the forsythia to fly again. We not only freed seven of the original bushes from their tangles and dead branches but found in so doing that there was a second generation of bushes in the mix as well! By the end of the summer I hope to have completed what John helped me to begin that was as much an internal learning as an external work task.

What I know now is that the sooner I clip a bad habit or attitude, the less time and pain there is conquering it or in letting it go. The longer I let negativity of any kind take hold, because of laziness or inattention, the more obscured it becomes and the more difficult it is to correct my vision of what is happening.

Enough! The sun is shining already and it’s time to take up my clippers and get to work.

I never liked the task of pruning. Even removing the suckers from tomato plants seemed too destructive and painful (for me as well as the plant!) People told me it was important for the plant that I remove the suckers – and even branches from growing trees. I thought it was just to make everything look neat and even beautiful. It was my least favorite task in outdoor work until I read an article that told me “the sucker should be removed to prevent it from sucking away the plant’s energy.” (http://www.maximumyield.com) (That sounds a little like what should be done for small children with a big bag full of Halloween candy.)

Jesus liked to use examples from nature to talk about spiritual growth and this morning it was about the necessity of pruning. With himself as the vine and God as the vine grower, he imaged the disciples (and us) as the branches in need of pruning in order to bear more fruit. It’s helpful to hold that image when I recognize or am told that I’m straying off my path. It’s sometimes very difficult to look into the mirror of truth about ourselves, but as I grow, allowing the pruning gets easier as I come to see the freedom in new growth.

It’s almost time to tidy up the plants outside. While I’m at that task, I will check on what needs to be clipped from the inside too. Won’t you join me?