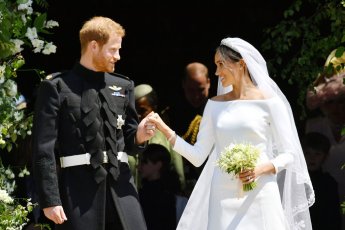 I had no intention of watching the royal wedding this morning of Prince Harry and Meghan Markle, primarily because television coverage began at 5:00 a.m. and secondarily because I was miffed at the extravagance of any dress, regardless of importance, that cost over $130,000. In addition, I was due at the start of a workshop day in our conference hall (across the yard from our house) before 9:00 and I was moving rather slowly, somewhat achy on this very rainy morning at 6:00. I was stopped in my attempt to manage a blog post, however, when I turned on my computer and found the ABC news team reporting the impending arrival of the bride. Seeing the huge, enthusiastic crowds lining the road, cheering, it was no contest; I was hooked.

Sometime later I read a line from the Washington Post that helped me to recognize the pettiness of my earlier reasoning. One of the authors, William Booth or Karla Adam, wrote mid-way through an excellent summary of the event: “Meghan Markle’s Givenchy wedding gown was beautiful. But the woman wearing it was unforgettable.” I couldn’t agree more. What the radiant bride and her equally unforgettable new husband achieved by the ceremony they brought to millions of people worldwide was truly momentous.

While stately and in many ways traditional, the ritual was punctuated with touches never before experienced in a British royal wedding. First, there was Meghan herself: an American actress, bi-racial and divorced, who passed muster to gain the permission of Queen Elizabeth to marry the beloved Harry. As a result, there were several American celebrities – many African American – and music selections that included modern American tunes as well as traditional High Church choir offerings. Two declamatory pieces stood out to me: the offering of petitionary prayers by the Queen’s own chaplain (an African American woman!) and the energetic – one might say “fiery” – sermon by the American Episcopal Presiding Bishop, delivered in the style of an old-fashioned Southern preacher. I smiled when he was at the peak of his bombastic point about the essence of love as the camera panned the crowd of proper Englishmen and women who were perhaps more than a bit challenged by this first African-American leader of the Episcopal Church in the United States.

In spite of all that, I had a feeling of quiet warmth and deep joy that seemed to permeate the event. Although a monumental celebration for the British people, it was surprisingly simple in many ways. It was only the children that processed in with the bride, joined at the halfway point by Prince Charles as escort and welcoming symbol of the royal family. There was no embellishment of the wedding ceremony itself, just the traditional vows, spoken meaningfully as always. And when the final blessing was given, no grand recessional ensued. The couple left by the side door with the bishops and Prince William. Only the congregation remained – silently – as a lovely cello solo gave pause for gratitude.

I am grateful as well to have had the opportunity for a lesson in what is important to recognize about judgments. The country of Great Britain has been changed by today’s event and so was I. I could easily have missed the opportunity to experience this wonderful example of unity in diversity founded in and fueled by love. And in addition I must admit that the dress and its 16-foot train was exquisite.

May God bless Meghan and Harry with a long and meaningful life together!