Today Christians everywhere celebrate Saint Pio of Pietrelcina, who died on this date in 1968. We know him as Padre Pio. There is much to say about this humble servant of God, which you can find on http://www.franciscanmedia.org or in any number of books, documentaries and internet sites or perhaps from people, still alive, who have had experience of his life. It was not easy; he suffered spiritually and physically, and, perhaps most of all, psychologically from the words and actions of those who did not believe the movements of God in his life.

The verse before the gospel in today’s lectionary could be called “difficult grace” in the life of Padre Pio. It calls us all to humility and truth in recognition of our gifts, and reads as follows: Let your light shine before others, that they may see your good deeds and glorify your heavenly Father.” Clearly, Padre Pio did not take credit for his extraordinary gift of healing or complain about the trials of his suffering, especially when he received the stigmata (the wounds of Christ in his physical form). It was his willingness to serve God in whatever way was asked of him that we honor today.

May we be willing each day to do the same. 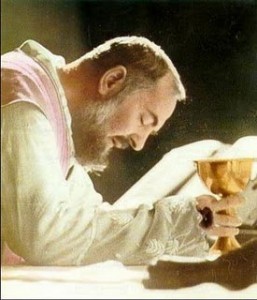 Today people all over the world are celebrating St. Pio of Pietrelcina, one of the most controversial and beloved saints in the history of Christianity. Unlike many of those holy people recognized in the Christian canon of saints, Francesco Forgione lived during the life of many of us (5/25/1887 – 9/23/1968). He entered the Capuchin Franciscan order at the age of 15 and took the name of Pio (Pius). He was ordained in 1910. After September 20, 1918, when he had a vision of Jesus and received the stigmata (the wounds of Christ) in his hands, feet and side, Pio suffered for the rest of his life. His deepest suffering came not from the wounds but from the notoriety, the claims that the wounds were self-inflicted, and from the embarrassment and humiliation of the cross he bore. Much of his life was spent in hearing the confessions of penitents and healing people near and far. He was reported to have several spiritual gifts including bi-location and was investigated many times but in the end was found to have been the conduit for many healings and declared a saint of the Roman Catholic Church in 2002. Most notable, it seems to me, is the fact that throughout the long and arduous process and steps toward canonization, there was no treatment of the extraordinary spiritual “gifts” but rather only focus on the verified healings and the holiness of life of this “suffering servant” of God.

Much has been written about Padre Pio and he is venerated the world over probably as much for his humility and willingness to be open to the suffering he bore for 50 years as for the image he was of the suffering Christ. We do not understand such happenings, nor should we celebrate or desire the suffering, but in this world of violence and pain in the everyday lives of so many people, we can give thanks for those, like Padre Pio, who do not lose hope in the face of their suffering and who put their faith in the God whose love is enough for them. 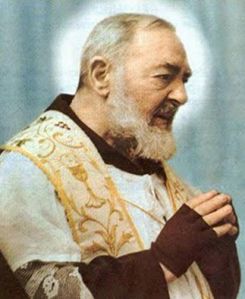 Today on the US Catholic Bishops’ website, I saw the name of the saint being celebrated today. I must’ve been still half-asleep because I was thinking it was some obscure person from long, long ago. I decided to look up St. Pio of Pietrelcina to see if there was anything interesting about him. In doing so, I saw the dates marking the span of his life (1887-1968) and realized all at once that he was the beloved Padre Pio, known the world over for his holiness, his tirelessness in hearing confessions and his suffering – both physical and psychological. An Italian Franciscan friar, baptized with the name Francesco, he modeled the life of his patron, St. Francis, even to the point of having a vision of Jesus (9/20/1918) during which he received the stigmata, the wounds of Jesus, in his hands, feet and side. Twice over the ensuing 13 years, the authenticity of the stigmata was questioned and Pio (his religious name) was not permitted to celebrate Mass publicly or hear confessions. He did not question or complain and these decisions were subsequently reversed. His life was spent in the confessional, forgiving penitents in the name of God, and in concern for the physically ill and suffering people who came to him. Many cures were credited to his intercession. By his urging a 350-bed hospital was built and was called “House for the Alleviation of Suffering.” He died on September 23, 1968 and was named a saint of the Church on June 16, 2002.

Visionaries and stigmatics are not commonly known in our day; we more easily accept those like St. Francis and Catherine of Siena, saints who lived centuries ago. Detractors and the curious were many in the life of Padre Pio in the last century where reason and ability to explain unusual events was (and continues to be for most) the order of the day. Now, when science and spirituality are beginning to speak the same language in tentative ways, it is to our advantage to suspend judgment of how certain things happen and live with the evidence of that they have happened in order to expand our consciousness of how God and the universe conspire for the good of all.