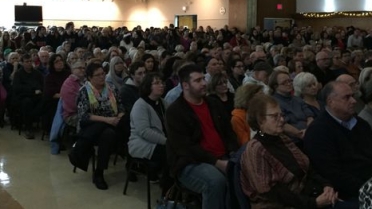 I had two experiences yesterday that, upon reflection, help me to understand more deeply what it means to “walk in the shoes of another” – at least in some small way.

2. I felt drawn to the prayer vigil in our town last evening at the Jewish Community Center for the people of Pittsburgh. I knew it would be crowded but the gathering space is large and the parking lots quite expansive. When I arrived, it was already past sunset and in the gathering darkness I saw people streaming from every direction toward the venue. The parking lots were already full so I backtracked to the Catholic church a block away, grateful that their back lot still had a place for me – although far back from the road. As I joined the steady stream of walkers, I felt like we were going toward the Temple Mount in Jerusalem or some such holy place to beg for solace as the weight of all the hatred and senseless violence overtook me. I was one with the throng of pilgrims going to prayer in sorrow but solidarity. There must have been over 500 people there as all the seats were taken and there were as many of us standing close together in every nook and cranny of the building as there were sitting. For our rather small community, that was amazing. We were Jews and Christians, Muslims and most likely others who might call themselves “Nones” – professing no religion but standing in solidarity because there seemed no other place to be last night that would satisfy. The messages were of love, not hate, of community and willingness, of unity as a way to move through sadness and shock. I recognized very few of the people there but walking back to my car in the darkness, I felt the strength of communion and it was enough.

I am different because of these events of yesterday. There is a deeper, visceral consciousness in me of how everything is connected in this world. It is no longer as theoretical a concept as it was yesterday morning and if I continue to hold the world in this deeper way, I trust that it will continue to grow. It is as if what has just happened as I look out and up to see blue sky and a large white cloud over the mountain announcing sunrise is happening not just outside but within me as well. I now (I hope) will walk with the refugees and will add my voice to those who choose them as brothers and sisters. I will pray for my Jewish sisters and brothers and speak for gun control whenever an opportunity arises. More than anything I will try to love well and leave judgments out of my conversation, and I will pray for peace, the peace that only love can give.