There is much to say about St. Benedict, whose feast is today, known the world over as the man who brought monasticism to the western world. Although Benedict lived 1,500 years ago his influence is still felt and one might say is being proliferated more broadly than ever before because of a movement called “monasteries without walls.” Lay people who are interested in deepening their spiritual life often turn to The Rule of St. Benedict for guidance and a way to live his principles in secular society.

Most prominent in “the Benedictine Way” is ora et labora. That phrase, meaning “prayer and work” speaks of the balanced way in which the day is designed in his Rule. It includes work alone and work with others as well as prayer alone and prayer with others, experienced in a rhythm that gives not only form but meaning to each day and thus to all of life. (See Joan Chittister, OSB: Wisdom Distilled From the Daily, chapter 6 for a brilliant explanation of this concept.) In this world of excess for some and lack for others as well as in the use of time, we could do well to reflect on how we spend our days.

In tandem with this concept of balance is the call to hospitality. Based on Hebrews 13:2 that says “Do not neglect to show hospitality to strangers, for thereby some have entertained angels unawares,” St. Benedict preached the necessity of welcoming everyone that we meet. How our world would change today if we took that advice to heart!

As we think of the influence of well-known people in our own day like Joan Chittister, Thomas Merton and Thomas Keating who have followed the rule of Benedict and shared it with the world, let us pray in thanksgiving also for the countless Benedictine monks and nuns through the centuries who have lived the life and carried the legacy of Benedict faithfully into the future.

Often these days I have conversations with others about the necessity of living in the present moment and doing our best to carve out some silence on a regular basis. This is not a new concept. I think of my first years in the convent when we spent the major part of every day in silence and wonder about how different life would be for me today if the Second Vatican Council had not achieved an aggiornamento (updating) that clarified the differences in monasticism and apostolic religious life. In addition to the understanding of the differences, however, there remains significant overlap in the various forms of such a call and the element of silence in each cannot be overstated.

Antony of Egypt, (ca. 251-356), celebrated today in the Christian Church and revered as a primary example of the eremitic life, spent his days in the desert from the age of 20 into an old age remarkable even today! I found a telling comment in David Keller’s book, Oasis of Wisdom: the Worlds of the Desert Fathers and Mothers. In speaking about “Abba Antony”, Keller remarks: “Even in his need for extreme solitude, he influenced other monks through their visits or decisions to live near his two places of refuge.” The second half of that statement says something very key, I think, to the power of silence not only as an example to be followed but also as an agent of communal transformation. Sitting in silence alone is a deepening experience and sitting in silence with another or many others with intention has an increased capacity for raising the energy of loving consciousness.

Today, then, let us be mindful of – and grateful for – the efficacious work of those who spend their days in the silence of contemplation and let us make our own effort toward peace and harmony in our hearts for the good of the world. 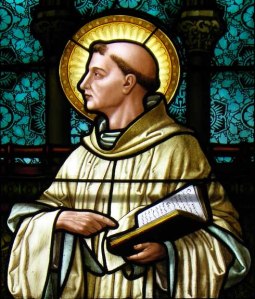 It was always a great feeling in a game of hide-and-seek to get to the point where the seeker gave up and called us in because we had been so successful in hiding. “Here I am!” in that case was a triumphant exclamation – rare in our neighborhood of expert searchers who knew all the best places to hide.

“Here I am!” in the Scriptures first appears as response of a child (Samuel) to what he thought was a call from his teacher (Eli) but really was God calling. The response appears again today but with an “add-on” as the refrain from Psalm 40 where we hear the psalmist proclaim: Here I am, Lord; I come to do your will. Neither Samuel nor the psalmist is hiding. They are both presenting themselves – quite eagerly it seems – for whatever task they are called to perform.

Today our Church celebrates the feast of St. Bernard of Clairvaux, a monastic who accomplished great things both for monasticism and in the world of his time (the 12th century). After a recounting of his many achievements in a short biography there is a telling sentence that reads, “Yet …he still retained a burning desire to return to the hidden monastic life of his younger days.” I found that not only admirable but instructive. His dedication to prayer in the midst of all that he was doing in God’s service was most likely the only reason that he knew what to do in any case.

So it is with us. If we have been hiding, it might be time to show ourselves and be “caught” for God’s purpose. If we have been willing, perhaps we need deeper listening in the silence to discern what to do or who to be. If we are already solidly placed in God’s service, today is a day to sing with the psalmist, To do your will, O my God, is my delight, and your law is within my heart! (PS 40:9) 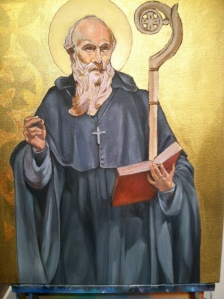 Today is the feast of St. Benedict of Nursia (480?-543) who is credited with bringing monasticism to the Western Hemisphere. Drawn to the monastic life, Benedict tried being a hermit but others were drawn to him and he began to imagine a community life where “various families of monks gathered together in one ‘Grand Monastery’ to give them the benefit of unity, fraternity and permanent worship in one house.”  (www.americancatholic.org) The structure that Benedict created – a balance of prayer, study, manual labor and community – has endured and flourished for 1500 years and has become a model for people seeking to live a balanced spiritual life. Not only is the rule of St. Benedict followed by women and men monastics the world over, but in our time there are new movements of “monasteries without walls” where lay people endeavor to live in the spirit of Benedict, gathering on a regular basis to strengthen their own prayer and balanced living practice. In addition to the four elements noted above which create a rhythm for each day, those who follow Benedict are steeped in the practice of hospitality, especially to travelers.

As I face today, I am grateful for Benedict and all those who follow his rule. I will observe my living of the four quadrants of prayer, study, labor and community as they are present in my day and endeavor to maintain that sense of balance as I interact with the workshop participants who have graced our Spiritual Center this weekend. 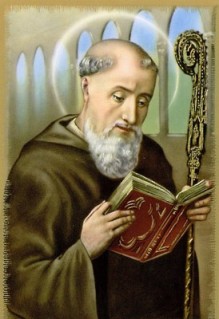 A verse from the Psalm of the day (51) speaks to me of St. Benedict whose feast is celebrated today. It says, “Behold, you are pleased with sincerity of heart and in my inmost being you teach me wisdom.” Benedict was born into a distinguished Italian family in or around the year 480. He felt the call to be a monk early in his life but did not find the life of the monastery he entered helpful in his quest for God so he became a hermit living in a cave for three years. Other monks came to him then, asking him to lead their monastery. He agreed but that experience was worse than the first as he was deemed too strict for the monks and they actually tried to poison him. His heart was by then, however, converted to the monastic way so and he dreamed of a monastery where families of monks could all come together in a life of brotherhood and unity with permanence/stability in prayer. This he achieved in the monastery at Monte Cassino which became one of the most famous monasteries in the world. Benedict is credited with bringing monasticism to the West and his Rule of Life (the only text he ever wrote) has been a model for monastics for 1500 years. The rhythm of prayer, liturgy, study and manual labor while living together in community has gathered men and women of sincere heart in an atmosphere of God’s love and in the quest for wisdom with the goal of union with God. Today, a new expression of Benedict’s rule is growing as “regular folks” join groups in “monasteries without walls.” Going about their life in “the world” these monastics of the heart follow the rule of Benedict seeking a balanced day of work and prayer, alone and in regular gatherings with others. Many have written about this phenomenon (Try Google!) and it is one more indication that God is alive and well and living in our world. Today we should be grateful for Benedict and all others who, simply by their sincerity and wisdom have led many seekers on the path of spiritual growth.