The book Ancient Songs Sung Anew by Lynn Bauman names Psalm 15 as “Friends of God.” You may recognize it as the one that asks, “Who can ascend the mountain of the Lord?” and then proceeds to talk about a clean heart, etc. It’s what we might call an examination of conscience but I prefer, these days, to tweak the vocabulary a bit and call it an examination of consciousness. Bauman’s translation seems to me today to be  helpful as applied to our present-day world. See if you don’t agree.

O God, who of us may approach the summit of your mountain strong? Who may come invited to your presence there? Only those who live their lives devoid of blame, who do what’s right, and from whose hearts truth is the only word; whose mouths are free from hateful words and hands from wrong, who treat their neighbors as their own, their kind; who do not give a place of honor to the evil one, but only to the friends of God. Whose promise is as good as any word they ever give, even in the face of loss or gain. They give and give, and ever give again, without hope of getting in return, and never take a bribe or speak against the innocent. All these shall come at last to you, all these, secure and overcomers, all! All these are ever yours; they’re proven true as your own friends.

Interestingly, for no apparent reason yesterday, a rhyming ditty from my childhood came wafting up from my past. “Make new friends but keep the old; one is silver and the other gold.” I heard it and smiled and then it was gone. I think it was one of the learnings of Girl Scout meetings. It came back to me this morning as I read the parable of the Kingdom of heaven being compared first to a net cast into the sea that collects every kind of fish. Upon return to shore, the fishermen separate out what is good and throw away what is bad.

After explaining that it will be so at “the end of the age” when angels will go out and separate the wicked from the righteous, Jesus gives a rather harrowing description of the fate of the wicked. He asks his disciples if they understand what he’s saying but when they say they do he proceeds to offer another image. I would have thought he was so happy that they got something he was talking about that he would have stopped there. But no. “The kingdom of heaven,” he continues, “is like the head of a household who brings forth from his storeroom both the new and the old.”

While I’m not trying do a serious analysis of Scripture here (I leave that to the theologians) I am interested that Jesus seems this time to be comparing new and old without judging them good or bad. You can’t know without opening the bottle and tasting the wine whether it is fine or turned to vinegar. I go back to the fishermen and see them grabbing fish and throwing them back or into a bucket, perhaps counting on their experience to help them make a quick decision about good or bad. Sometimes, though, it takes time to assess what is worthy or not.

So I guess my singsong memory is relevant after all. No snap judgments of friends who are getting older or newer acquaintances who have yet to show their true colors. Just looking for the deeper values that come to light with time and patience.

Jealousy is a very dangerous trait in a person. It seems to me a bit more serious than envy although it appears in the dictionary as envy’s synonym. I might be envious of someone’s good looks or good luck but, if I have a positive attitude about my own life, I don’t spend a lot of time comparing my lot with those of others. If jealousy takes hold of my life, however, it can lead to wishing harm to others – sometimes instigating events that will cause very bad things to happen.

In this morning’s lectionary reading from the first book of Samuel (1 SM 18:6-9, 19:1-7) we read about what seems like a childish attitude on the part of King Saul who is returning from a great victory over the Philistines. At his side was David, the hero that we know from his fame with his slingshot; he used it to slay the giant, Goliath. Everyone was singing and dancing as Saul and David approached. Unfortunately, the lyrics to their song (“Saul has slain his thousands and David his ten thousands”) planted the seed of jealousy in Saul and as it grew he feared that David would take over the kingship of Israel.

It’s always good to have a friend who can see such a situation honestly and speak the truth to the parties. In this case it was fortuitous because Jonathan was both Saul’s son and David’s friend. Well-placed to see the situation as it truly was, Jonathan convinced Saul (for the moment at least) that David had been a faithful servant, desiring nothing but the good of the nation and, in fact, had helped Saul very much by his deeds.

Two adages come to mind as I think about applications of this story for us. The French are known to say: Plus ca change, plus c’est la meme chose (The more things change, the more they stay the same) and in English we hear that it was ever thus. In our culture of today, there is so much pressure to get ahead, to be the best (which means the most successful or the richest), to climb to the top of the corporate ladder – as well as to be the best-dressed, most glamorous, the richest. We do well to cultivate the qualities of honesty, gratitude and the willingness to be satisfied with what we have and who we are. Oh yes, and don’t forget to thank God for good friends!

I don’t ever recall the Church celebrating a feast in honor of St. Paul’s companions Timothy and Titus even though they have been known to me as recipients of Paul’s letters. Today I hear them accorded the title of “Saint” which clearly they deserve because of their zeal in spreading the gospel for which they eventually lost their lives. A few things stand out for me after reading commentary and thinking about Paul’s letters to each of them.

What all of this points up for me is not only that different gifts are essential for the work to be done, but also that “faith is caught, not taught” by people who exhibit the depth of their own faith to others, and that friends are very important; we cannot persevere without them, even if the relationships are carried on from a distance. (Note the warmth in Paul’s letters for both of these men.)

After all this pondering, I find myself conjuring images of these two admirable men as they go about their ministry. I see them arriving by boat, smiling with enthusiasm toward their greeters and exuding love with their every step, writing messages back to Paul of all the happenings of the day or the month and eagerly receiving his response…How grateful I am for their fellowship in the communion of saints to which we all belong! 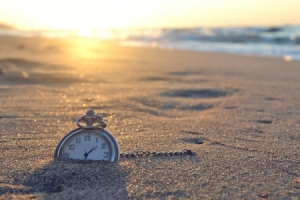 This is the weekend that we call the end of summer even though the calendar says we have some weeks still before the Autumn Equinox. People all over the USA are planning picnics and traffic has been heavy on the highways since Friday as families and friends celebrate the passing of yet another season that, for many, includes some slow down and vacation time. How can this be? In some ways it appears that the children just finished the past school year, and yet some of the events of a month or two ago seem like a faint memory. Time’s passing has a way of confounding us. It’s like that old adage from Henry Van Dyke that time is too slow for those who wait, too swift for those who fear, too long for those who grieve, too short for those who rejoice…

Psalm 90 says this morning: Time for you is as nothing, Lord, a thousand years of it, your yesterday, passing as a watch of the night. We are your dream; we’re briefly here then simply gone, like grass in the morning green and growing and at sunset withered, dry. Not such an upbeat thought for those of us feeling the press of getting older by the minute. Later in the psalm, however, comes focus on a stance we ought to take, perhaps, going forward today:

So teach us the limit of our days that we may give our hearts to wisdom’s voice. And turn a gracious face toward us for we are here on earth to serve. Each morning let us rise to eat compassion’s bread. And even in the midst of dread, and years of deepest pain, make us glad for these. For there especially you are ever present as the guide. You show us secret splendors through your works and ways. You teach our hands new crafts, new handiwork through these. So may this grace, this graciousness be ours, and rest upon us now and evermore we pray. Amen.