I did some interesting reading this morning about the nationally and internationally recognized celebration of fathers. (That would be today for us in the USA.) I was surprised to learn that although attempts were made, especially by presidents Wilson, Coolidge and Johnson, to declare it a permanent national holiday, it was Richard Nixon that finally signed it into law in 1972.

Not surprisingly, it was back in 1909 that a woman, Sonora Smart Dodd, had the idea of celebrating fathers in the same manner as were mothers. She was sitting in church listening to a Mother’s Day sermon, thinking of her own father whose wife had died in childbirth and left him to raise his six children on his own. So it was in 1909 that the first celebration was held in Spokane, Washington, a celebration in churches where red roses were handed out to be pinned on living fathers and white to commemorate the deceased. At the conclusion of the service, Dodd rode through the city in a horse-drawn carriage with her own infant son, bringing roses and gifts to home-bound fathers. (Wikipedia)

Many people today consider both Mother’s and Father’s Day “Hallmark holidays,” indicating the economic benefit to salespersons. Personally, I have always been happy to celebrate both days dedicated to parents (no material gifts…just love and kisses) because I was blessed with two amazing models of what parents can be. It is always my hope that people who have not been similarly fortunate might have people in their lives who fulfill that role for them, not with material gifts but the gift of love and a willingness to stand as a guide in navigating the path to adulthood.

Perhaps today is a good day for us to look around and find a younger person or two for whom we can fill that role and learn what a privilege it can be. Happy Father’s Day! 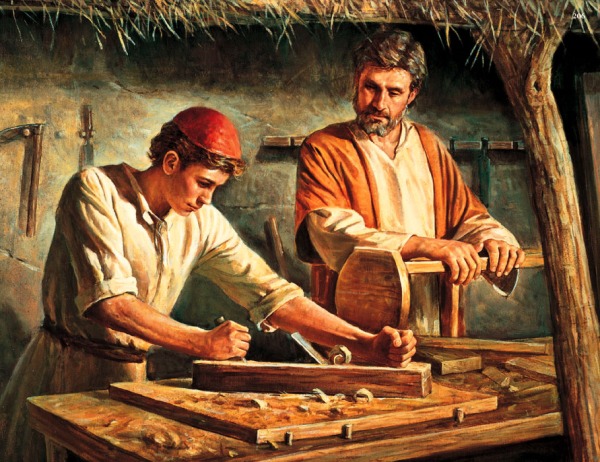 Over the past 48 hours I have had the opportunity to spend time with two women whose fathers died this past summer. Last night my own father appeared in a dream which I only remember for his passing presence and the appearance of his wedding ring – not on his hand but clearly his – a strong symbol in his life and the lives of our family.

Curiously two very different gospels appear in the lectionary today. The first is the beginning of Mark’s gospel that speaks of John the Baptist’s proclamation of Jesus and then the appearance of Jesus at his baptism – the beginning of his public life – where the voice of God was heard to say, You are my beloved Son; with you I am well-pleased. The second choice for the gospel reading begins by noting that Jesus began his ministry at about thirty years of age and then goes on to relate his ancestry, not in the manner of the more familiar text from Matthew but backward from Joseph all the way to Adam, son of God. I must have been somewhat inattentive to my reading because I started to reach for some other text for inspiration when something inside said, “Read them again.”

Being a Sister of St. Joseph, I am usually eager to comment when Joseph shows up in gospel stories. Today, it took two readings to make the connection of the importance of the role of fathers in the lives of their sons – and daughters. I am one of the “lucky ones” to have had a father who shone with the love of God and showered that kind of love on others throughout his life. We don’t have too much evidence from the words of Scripture of the man Joseph was but it’s easy to extrapolate his character from the few scenes in which he appears. His care for his family, his trust in God and his willingness to participate in the plan of God regardless of the cost are easily seen without a single word from him.

Today, then, I am grateful for the nudge to reflect on fatherhood and the three great fathers who have mirrored Joseph to me in the lives and gratitude of their daughters. In addition, I pray that all children will somehow have a father figure in their lives who will teach them and love them in the way God loves all of us – into the fullness of life.