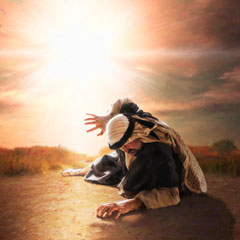 Yesterday I was speaking about the Acts of the Apostles, the book of the Christian Scriptures that follows the four gospels, taking up the life and times of “the Way” – the early days of Christianity after Christ. I said there are great stories in that book, mostly stories of heroism and conversion and the development of community by those who carried on the mission of Jesus. Some of the accounts speak of people who had been in contact with Jesus himself and some were affected by the lives and witness of those first followers. It was a time of growth like ripples in a pond, reaching out to more and more people who “heard the word of God and kept it.”

Today, however, we have one of the most familiar and miraculous stories of conversion in the early Christian community (Acts 9:1-20). Everything in Paul’s story defies common sense. He is a persecutor of Christians on the hunt for anyone who declares belief in Christ. Suddenly, on his way to Damascus, he is struck down and blinded by a light so bright that he has to be led along by the men traveling with him who heard a voice speaking but saw nothing. At the same time Ananias, a disciple in Damascus, was getting instructions from the Lord about what was happening to Saul/Paul (God changes names sometimes when calling us to new life). The rest of the story sees Paul becoming “the apostle to the Gentiles” who travels the known world preaching and writing to the burgeoning communities of Christians, encouraging them to live in the love and fidelity that Christ still calls for in our time.

Paul’s story always makes me reflect on the different ways in which people come to faith. I was born into a Roman Catholic family and nurtured in the faith at Catholic schools and then a religious order of Sisters of St. Joseph, so my path was set from the start. Happily, I came to adulthood in a time of renewal in Christianity, after the Second Vatican Council, that “opening of the windows” to let in the Spirit of God, led by “Good Pope John” (now Saint John XXIII). Thus, slowly but surely I learned that the similarities in all denominations of Christians far out-weighed the differences. Experience and study have finally brought me to the conclusion that the Shema proclaims in the book of Deuteronomy (DEUT 6:4-9) that is the centerpiece of morning and evening Jewish prayer services: Hear, O Israel, the Lord our God, the Lord is one. The freedom in adhering to a faith tradition for me gives me a framework for living but also comes from a recognition that regardless of how we name the motivating force for our life, we are in essence all one – brothers and sisters on this planet who are connected and responsible for the good of all.

That last statement is a big leap from the days when my forbears were thinking that the Catholics were the only ones going to heaven. The amazing thing is that my Methodist friend across the street for whom I worried every day was told that I was the unfortunate one because she would find only Methodists when she got to heaven! I am much happier to know that all of us are linked and that conversion ought to be a waking up to whatever causes us to be more universal in our loving, more tolerant of difference and more determined to make the earth a home for all creation that brings peace to all beings.