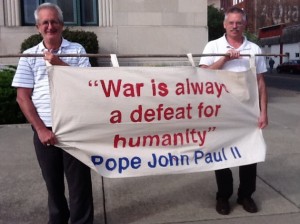 The seventh chapter of John’s gospel is different from the synoptics because in what we read this morning (JN 7: 1-2, 10, 25-30) Jesus is already in danger. People are wondering if he has been identified as the Messiah but dispute that possibility because they “know where he is from” – indicating that no local person could ever be the Christ. Knowing that they’re wondering about him, Jesus declares, “You know me and also know where I am from. Yet I did not come on my own, but the one who sent me, whom you do not know, is true. I know him, I am from him, and he sent me.” So at this point they tried to arrest him but no one laid a hand on him because his hour had not yet come – a typical Johannine indication of his divinity.

Reflecting on the fact of that early message of danger in the public ministry of Jesus, I began to think of other, more contemporary, people who risked speaking and acting counter-culturally and often were vilified or even killed as a result while also serving as a transformational influence on others. I first thought of people like Mohandas Gandhi, Martin Luther King, Jr., Brother Roger Schutz of Taize…but then I also began considering people closer to home whose risk of injury was less probable but who staked their life on their principles putting their reputation on the line. There is a small but persistent group of people who stand and pray every Monday outside our county office building hoping to influence legislation for the poor in our community. There were two local men who stood in the cold on Main Street during the harsh winter in the run-up to the Iraq war holding signs to alert passing drivers of the danger of making war rather than peace.

There are so many examples – large and small – of such courage. And I wonder what fuels the decisions of some to speak out for love and justice while some of us remain silent. It must be the same conviction that moved Jesus: the knowledge that he was sent, that there was something greater than his safety or even his life that needed to be imaged. Today I will try to walk in the shoes of that courage, that conviction, and try to find in myself a way to my deepest integrity and authenticity, knowing that whatever I am called to comes from “the One who sent me” and that I will never be abandoned if I strive to live in the truth.