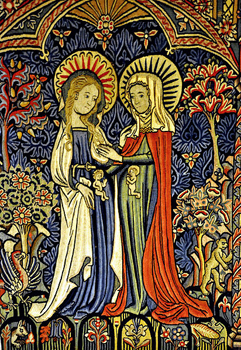 Today is one of the many church feasts honoring Mary, the mother of Jesus. I always remember the date of this one because it is the birthday of my cousin, Ginni – Virginia – named for Mary under the title of the “Blessed Virgin.” When I was young it was celebrated as the feast of the Mary, Queen of Heaven. I find it interesting that when the liturgical calendar was updated some years ago, this feast became instead the commemoration of the Visitation of Mary to her kinswoman, Elizabeth. I wonder if the rationale for the shift was the same as that of Elizabeth Johnson, CSJ in her book entitled Truly Our Sister: Mary in the Communion of Saints. Sister Elizabeth’s thesis is that although Mary is revered for the great honor bestowed on her by God she was a human being who lived a human life with the same joys and sorrows of women of the world in all eras of our history. The book is scholarly, to be sure, but my favorite section is the one that paints a picture of what life was like in Nazareth in the first century, including such images as the setup of the family home and the daily rituals, successfully bringing into focus Mary’s reality. It is a wonderful book, best read perhaps saving the first sections on theological considerations until after one has been treated to the world in which Mary lived and a consideration of all the biblical texts where she is mentioned and/or encountered.

The story of Mary’s visit to Elizabeth is indicative of the shift in the above-mentioned perception of her as a woman. Young, most likely terrified not only of the fact of her pregnancy but of its consequences in her culture, Mary flees “to the hill country” to an older relative, also miraculously pregnant and most likely somewhat anxious herself. One can only imagine the comfort they found in each other and how everyday tasks that they performed together became the solace needed to put their worlds right again. I picture them in the kitchen chopping vegetables and sharing their feelings about life and what the future might hold for each of them. As a backdrop for these thoughts, the words of Paul in his letter to the Romans (12: 9-16) seem particularly apt this morning. See if you don’t agree.

Brothers and sisters, let love be sincere; hate what is evil, hold onto what is good, love one another with mutual affection, anticipate one another in showing honor. Do not grow slack in zeal, be fervent in spirit, serve the Lord. Rejoice in hope, endure in affliction, persevere in prayer. Contribute to the needs of the holy ones, exercise hospitality. Bless those who persecute you, bless and do not curse them. Rejoice with those who rejoice, weep with those who weep. Have the same regard for one another; do not be haughty but associate with the lowly; do not be wise in your own estimation.