“You are an angel!” That’s a common statement for people who have experienced the kindness and help of another in a time of need. We have pictures of angels from our childhood bedrooms and a prayer (“Angel of God, my Guardian dear…”) that got some of us through scary nights in our youth. Today is the commemoration of the Guardian Angels and we can find mention of those holy, welcome beings in both Scripture and Church documents (Catechism of the Catholic Church, 328, 336) Moreover most of us have stories that illustrate God’s protection that we attribute to beings of other realms and humans who have acted as such.

This is a comforting feast, a day on which we thank God for the presence of angels in our lives, be they seen or felt. May you know the blessing of angels and walk in peace today and every day! 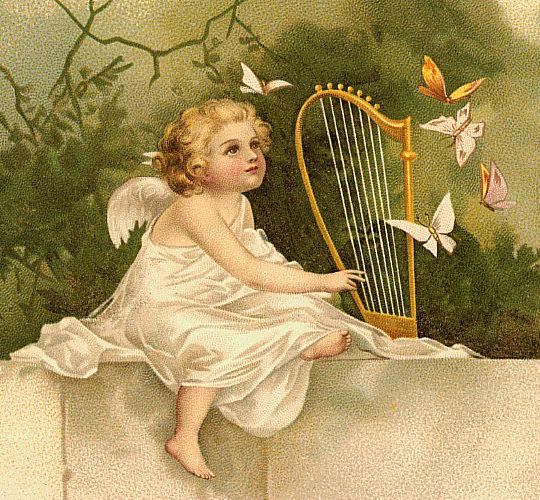 The psalmist is “waxing eloquent” this morning. As Psalm 8 rings in my inner sight, I recall the beautiful blue sky and sunshine of yesterday afternoon as I drove and sang with the accompaniment of longtime liturgical musicians whose music always stirs me to praise. This weekend was well begun last evening (see yesterday’s post) with a sellout crowd for our communal “walk down memory lane.” I look forward to a full day of enthusiastic sharing in words toward a hopeful future and feelings of gratitude for what we have been given throughout our history from our roots in 17th century France to worldwide service in love of God and neighbor.

Who are we, the psalmist asks God, that you should care for us? You have made us little less than the angels…and today we will revel in thanksgiving! 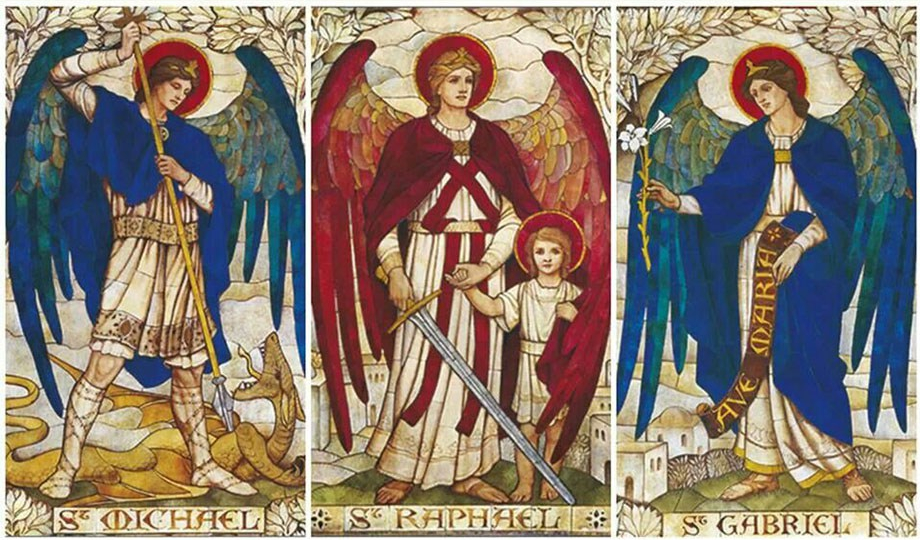 Instead of just speaking of a childhood practice of nighttime prayer (“Angel of God, my guardian dear…”) on this feast of the Archangels Michael, Gabriel and Raphael, I decided to google them and then angels in general. I could spend the day reading with what I found on the internet – some items familiar to me and some totally foreign. I won’t be researching today as other tasks are already calling to me, but I will put it on my list of “to-do” projects, I think, as there is a vast body of information that attests to the reality and functionality of these powerhouses of presence in the spiritual world.

What do you believe about angels? How have you experienced guidance and/or inspiration in ways beyond the physical world? We certainly can use a gathering of spirits to help us and sustain our hope in the troubled times in which we live. Franciscan Media summarizes my thoughts in the following paragraph this morning.

Earlier belief that inexplicable events were due to the actions of spiritual beings has given way to a scientific world-view and a different sense of cause and effect. Yet believers still experience God’s protection, communication and guidance in ways which defy description. We cannot dismiss angels too lightly.

One of the first prayers I (and many others) learned as a child was about angels. (Angel of God, my guardian dear, to whom God’s love commits me here, ever this day (or night) be at my side to light and guard, to rule and guide.) It was great comfort to know that there was a being just over the border of our universe who was God’s gift to me personally. I didn’t have to theologize about it since it was a given and there were three great “Archangels” that we knew by name from Scripture, each with a mission: Michael protected, Gabriel announced and Raphael guided. (See visions in the Book of Daniel and stories from the Book of Tobit.) Why wouldn’t God give me someone to do those things for me? I never needed to name my angel as some children did. It was enough that God knew who was taking care of me.

Although devotional life has diminished in some cases in the face of scientific research, angels are still popular in more ways than as decorations on knick-knack shelves. Of the angels, Fr. Don Miller comments that “[B]elievers still experience God’s protection, communication and guidance in ways that defy description.” A frequent presence at the Spiritual Center in Windsor, NY where I live is Jayne Howard Feldman, called by many “The Angel Lady.” Her loving ways and guidance as well as her books on the angels have inspired many people in workshops and personal sessions. Jayne’s inspiration has led her to create “Be an Angel Day” and she is the best example of how to achieve that goal!

On this day when we are reminded of the “angels” in our lives, some of human description and some more ethereal, let us be grateful and imitate the ways in which we have been blessed by their inspiration and presence to us.

Each of the readings this morning tells a story of conversion because of a miraculous initiation on God’s part. In IS 6:1-8, the prophet has a vision of God and the Seraphim, whose voices of praise shook the doorframe and filled the house with smoke. Isaiah lamented because, although he was gifted with this kind of vision, he saw himself as “a man of unclean lips living among a people of unclean lips.” One of the angels took an ember from the altar with tongs and held it to Isaiah’s mouth to cleanse his sin after which the prophet “heard the voice of the Lord saying, Whom shall I send? Who will go for us?” Isaiah answered, “Here I am. Send me.”

Paul’s conversion is recorded as no less spectacular as Paul was struck to the ground and blinded by the light of God on the way to Damascus, having heard the voice of Christ call to him, “Saul, Saul, why are you persecuting me?” This morning Paul is preaching the gospel to the Corinthians (1COR 15:1-11). As he recounts all the appearances of Christ after the Resurrection, he says at the end, “Last of all he appeared to me. For I am the least of the apostles, not fit to be called an apostle because I persecuted the church of God. But by the grace of God that is what I am, and his grace to me has not been ineffective.”

Today’s gospel story of conversion can be seen as the first of many in the life of Peter and it is compelling in the physicality of it (Jesus is right in the boat with him rather than giving instructions from heaven) as much as in its similarity to the first two readings. Jesus is being pressed by the crowds so he just walks up to Peter’s boat, gets in, tells him to push out a little way so he can continue preaching without being trampled, sits down and resumes his teaching. I often wonder what that encounter touched in Peter to allow his response to be so seamless – no objection or asking for time to finish washing his nets…especially since when Jesus stopped preaching and told Peter to go out further and start fishing again, he wasn’t so keen, having fished all night with no success. But he did what Jesus asked. The rest of the story is familiar; so many fish in the nets that they filled two boats. The response of Peter echoes Isaiah and Paul when he “fell to his knees and said, Depart from me, Lord, for I am a sinful man.” Jesus said in reply, “Do not be afraid; from now on you will be catching [people].”

So here’s my conclusion which actually arose because of one sentence in the gospel but is built on the happenings in all three stories. Peter, Paul and Isaiah all experienced a shocking personal revelation of God’s power to which each of them responded by speaking of their unworthiness. God did not respond that they were, in fact, worthy; rather in each case God removed their unworthiness which would have blocked them from their mission. Most of us are not recipients of such miraculous calls from God but many of us tend to respond with the same hesitation; we feel unworthy. Paul caught the point that it is God’s grace that allows us to overcome what blocks us from doing the work that is ours. But what is it that helps us to truly see what Paul saw? What removes the blindness that keeps us from response?

What answers those questions for me is the second command of Jesus to Peter this morning. “Put out into deep water and lower your nets for a catch,” Jesus said. Seen in my life as a metaphor, that statement reminds me that the habits of deep listening and faith are the keys to breaking out of the mindset of unworthiness and trusting God’s grace in all I attempt to accomplish. Success and failure do not matter as much as willingness to serve. God will take care of the rest of the story. 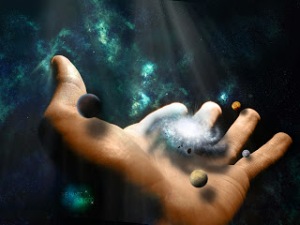 Today I’m happy to be accompanied through the day by my favorite Psalm. It speaks of all creation and our place in it. It seems to me lately that we are coming to understand better our responsibility toward each other as well as the “non-human” elements of what exists. The early biblical charge of God to “fill the earth and subdue it” has gradually morphed into a gratitude for the beauty that we experience and a reverence for what we have been given. We have a long way to go and some big mistakes to correct regarding environmental waste and carelessness, but the children of the world certainly seem to have a better grasp of how we and the cosmos are all connected, giving me hope for the future. All of that comes clear in Psalm 8.

O God, our God, how glorious is your name over all the earth!…When I behold your heavens, the work of your fingers, the moon and the stars which you set in place, who are we that you should be mindful us, that you should care for us? You have made us little less than the angels and set us over the works of your hands…

A reflection that I read this morning said that the night sky has always been for humanity a source of wonder and awe. Looking up on a clear night with the vast star-field spread out above puts our lives and world into a very different perspective. We see ourselves as small and insignificant in this vastness, but are we? A voice out of the universe seems to answer our question: “You have a sacred place and role to fulfill.”