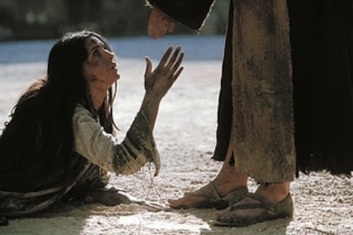 The gospel for today is the story of the woman caught in adultery. Leaving aside the justice question about the man involved in the incident – while not unaware of the impact it has even today – I am given to comment on the way Jesus puts his attention on the woman. After having said the famous line: Let the one among you who is without sin be the first to throw a stone at her,” and doing that mysterious writing in the sand, Jesus turns to the woman. He engages her in the most compassionate way by asking, “Woman, where are they?” My guess is that he said that so she would raise her head in order to see that they had all skulked away. She had certainly been bowed to the ground in fear and humiliation. I can see her looking around in amazement as he asks the second question: “Has no one condemned you?” and then – best of all – says, “Neither will I.”

The important thing to note here is that even though Jesus is totally forgiving her, he also requires something because he ends with the charge to “Go, and from now on do not sin any more.” What a wonderful moment though! She can be confident that he knows her deeply in ways that before this encounter she would have hidden from everyone she valued in her life. Her job now is to forgive herself as she goes forward because she is just like all others who know that they are not perfect but are trying to be better. And the men that were going to stone her? With luck, they learned not to judge but to take a look at their own sinfulness – in whatever form – and were converted as well. Perhaps we might do the same today, remembering that we too are forgiven.