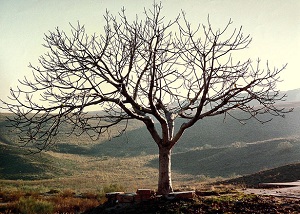 The lectionary gospel for today tells the story of the fig tree which for three years after it had been planted had produced no fruit, such that the owner told his gardener to cut it down. The gardener must have been a compassionate environmentalist as he responded in the following way: “Sir, leave it for this year also, and I shall cultivate the ground around it and fertilize it; it may bear fruit in the future.” Instantly I had the image before me of a small plant that my family had bought in memory of my father. We had wanted a hydrangea bush and planted it in a place we thought it would thrive. For six years we waited for some sign of life. We should have known from the branches that were tightly entwined but very tree-like that it was not what we had ordered but this was many years ago and none of us was very savvy about the plant world.

One summer we had a volunteer groundskeeper who suggested moving the plant since it did not seem dead, just not thriving. She situated it in another part of the yard in a different kind of soil that got a different amount of sunlight each day. The next spring it produced leaves and shoots and let us know that she was, in fact, not a hydrangea at all but a beautiful hibiscus that only needed to be recognized and situated correctly in order to grow! I often bless the mistake of the salesperson who must have been new to the work or mixed up words beginning with the letter “H” because the result was better than we could have imagined.

Sometimes it does take a long time – even for people – to find their place and grow as we are all meant to do. It takes patience and nurturing perseverance to wait for the flowering. Would that we could always allow and encourage that in each other with no timeline in mind before we give up. There is only God’s time, i.e. the present moment for this kind of gardening.

2 thoughts on “The Barren Fig Tree”