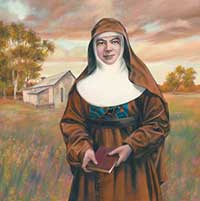 Having lived what I sometimes call “a charmed life,” I am often amazed at the zeal and the difficulties of those that we Roman Catholics (and others) call saints. I wonder if I wouldn’t have given up by now if I had come up against betrayal and poor treatment (including excommunication for a time!) from colleagues and church officials encountered by St. Mary MacKillop – the first named saint of Australia and the “Saint of the Day” on the Franciscan Media website for today.

Mary’s desire was simply to teach children and care for the poor, especially in rural areas throughout her native Australia. She was drawn to religious life but unable to find a religious community that met her needs, so she founded – with her spiritual director, Fr. Julian Woods, – the Sisters of St. Joseph of the Sacred Heart (the Josephites). Born in 1842, she was steadfast in her vision and by the end of her life in 1909 saw her congregation thriving. Her path to sainthood is well-documented on http://www.franciscanmedia.org and is worth a read as a good example of the adage: Never give up!