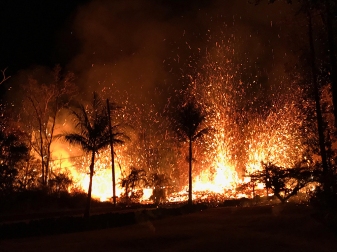 The psalmist is calling this morning for rest (PS 55) – not just because of fatigue but from all the evil in the world. What is most difficult for me to abide are the senseless killings in high schools that have increased exponentially this year. It’s so difficult to hear on the news about the lives of many good young people senselessly snuffed out for no reason except the revenge of a deranged shooter. Add to that all the disastrous weather conditions – the destructive storms and the monumental effects of the Hawaiian volcanic eruptions – and it’s no wonder that we might react to the cry of the psalmist.

And I say, “Had I but wings like a dove, I would fly away and be at rest…I would wait for the One who saves me from the violent storms and the tempest…Engulf them, O Lord; divide their counsels!”

The catch is in the last sentence of the quoted text which is not the end of the psalm. The psalmist continues, vehemently at times, desiring destruction by God of the evil perpetrators. In his commentary, Lynn Bauman writes the following thoughts that I believe are worth more than a passing glance.

The psalmist is at the stage in spiritual experience where he or she prays to be saved out of misery, but asks God to destroy the tormentors. This is certainly how we often feel. Is that the only prayer possible? What other forms of prayer are asked of us? (Ancient Songs Sung Anew)