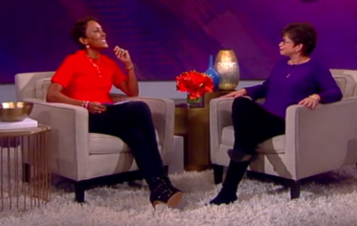 Last night I watched a special program – part of a series, I believe – celebrating Black History Month. It was Robin Roberts interviewing Valerie Jarrett, Senior Advisor to President Barack Obama for the full eight years of his presidency. It was more like a living room conversation with about 100 friends sitting around the perimeter asking the occasional question or adding an opinion. And Valerie Jarrett was so fine! It was a delight to experience two such vibrant women speaking clearly about the privilege of public service, the challenges of life in any situation and their desire to be a force for good for the next generations of Americans. What I found most helpful was the fact that they did not need to preach about those topics. Both were just strong women with no need for abrasiveness or negativity to make a point. They simply shared their experiences and ideas and the tenor of the conversation caused truth to shine through.

I thought back to that event this morning when I read today’s rather brief and stark gospel from Mark (7:24-30) about the Syrophoenician-born Greek woman who challenged Jesus at what appeared to be not his finest hour. The text tells us that Jesus “entered a house and wanted no one to know about it, but he could not escape notice.” He must not have had anyone with him because it seems the woman just slipped in unannounced and unimpeded to beg his intercession in curing her daughter. He was clearly not in a mood to deal with this foreigner – a woman, no less – at that very moment but even his uncharacteristic, unkind reply could not dissuade her. After being called “a dog” she retorted that “even the dogs under the table eat the children’s scraps.”

We know the story. Her chutzpah got her what she wanted; her daughter was healed. Unwilling or unable to see Jesus in such a bad mood, I’m always left wondering if perhaps he is testing her for some purpose…But then I decide to allow Jesus at least one day of grumpiness! The point is that the woman didn’t need to rant and rave about how unfair he was being or walk off in a huff questioning his integrity. She just saw her chance and took it, saying what was true in the same challenging metaphoric language that he had used.

So here’s to women (and men) who don’t use prejudice against them as a weapon but rather take the high road in situations that could be volatile or destructive, turning them to lessons of right action. They shine like the sunlight on the strong, shimmering tree outside my window, covered this morning in the icy remnants of yesterday’s storm, now transformed into light.