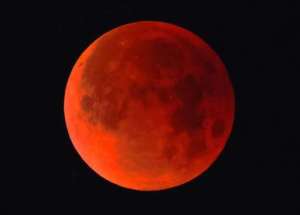 I would guess that people in Los Angeles who made the trip to Griffith Observatory this morning to see (exactly one hour ago – 3:48AM Pacific time) the moment of total eclipse of the moon are beginning to make their way home by now. Why would someone make that trek in the middle of the night just to see the moon? Well, maybe because it wasn’t just the full moon but rather a “Super Blue Blood Moon!” What does that mean? A blue moon is a rather frequent experience: the second full moon in the same month of the year. What makes it “super” is the fact that it reaches its closest position to earth, thus making it appear larger and brighter in the sky than normal. The “blood” designation comes from the fact that there is a red tinted shadow across the face of the moon due to the rays of sunlight passing through earth’s atmosphere as the moon falls into earth’s shadow. To add to all those necessary conditions for this phenomenon is the weather. Chances were good for a clear night in Alaska, Hawaii and California. I’m sure the resulting pictures will be glorious – and bountiful, especially since this is the first time this phenomenon was visible in North America since 1866!

It makes me happy to think that it is not only astronomers who get excited about these events. The way that the universe works is truly miraculous and we ought to be grateful for those scientists who are able in our time to define for us not only the “what” but the “why.” The Griffith Observatory director got into the spirit of the event in a wonderfully whimsical way, dressing up like a wizard and banging pots and pans outside the observatory while the crowd watched the eclipse. He was re-enacting a ritual from ancient Babylon in response to a populace that believed they had to scare away a mysterious creature that was swallowing the moon.

Director Ed Krupp seems to understand both the scientific and mystical elements of such an experience as noted in his statement to the press. “It’s one thing,” he remarked, “to learn about this event in a book and another to see it for yourself.” I wish him all the best and hope he keeps on banging his pots all day long!