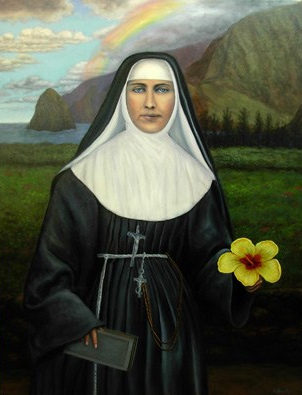 Today I honor a woman and a religious community that I have revered since I was 13 years old. When my father was transferred from Boston, MA to Syracuse, NY for work, it seemed as if we had moved to the end of the world. Actually it was only eight hours by train from all those relatives left behind. For the family of Barbara Cope, as she was known then, the trip in 1840 was longer: from Germany to Utica, NY when Barbara was only two years old. When she was 24 years old she entered the religious order of St. Francis in Syracuse, about two miles down the road from where I found myself in 1960 at St. Daniel’s School, being taught by the descendants of those very same Sisters of St. Francis.

I have spoken about Mother Marianne (her given name in the religious order) on this date, her feast day, in previous years as she is now a canonized saint in the Roman Catholic Church. Her whole life was extraordinary but two things stand out today for me in the saint-of-the-day reflection at http://www.franciscanmedia.org. First, generous response to a call. More than 50 religious communities in the United States and Canada were asked to send Sisters to minister to the lepers (victims of Hansen’s Disease). When the request was put to the Syracuse Franciscans, 35 Sisters volunteered immediately – including their superior, Mother Marianne. Secondly, as is often the case, little things make a difference. When Mother Marianne took over, the commentary says, she “changed life on Molokai by introducing cleanliness, pride and fun to the colony. Bright scarves and pretty dresses for the women were part of her approach.”

There are many stories attached to the life of this brilliant, generous woman. The stories and the gifts live on in her Sisters, ministering among us in the spirit of aloha. For all of them, and for that joyous spirit that welcomed me so warmly in 7th grade, I shall be forever grateful. Happy Feast Day, Sisters!