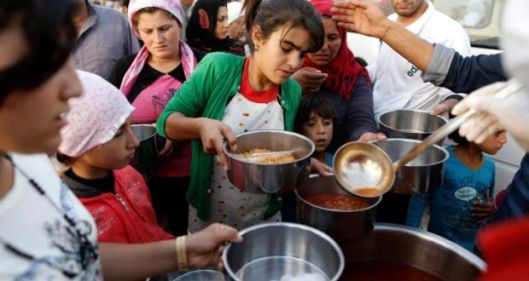 Today in Western Christianity (and tomorrow in the East) we celebrate the feast of The Holy Innocents. Herod the Great, an insecure king of Judea, was fearful of any threat to his throne. When astrologers from the East who had come to pay homage to the “newborn king” Jesus and eluded him upon their departure without giving up his whereabouts to Herod, the king became furious and ordered all boys under the age of two years to be killed. This slaughter puts one in mind of children in war-torn countries today who, though innocent in every way, die each day from violence, starvation or disease.

I have rarely, if ever, been as distressed about the plight of the world’s children as I have been in the past year seeing newsfeed of the children who are attempting to flee tyranny and danger. Especially moving to me are the pictures from Syria, recently and most dramatically, those from Aleppo. I carry the images with me everywhere, lamenting my inability to effect any tiny change to the situation.

Miraculously, I saw on the news some days ago, the story of a woman – a Lebanese American photographer and chef – who has been taking soup to a refugee camp on the Lebanese-Syrian border. Her name is Barbara Abdeni Massaad and over the past year she had created a project called Soup For Syria. Garnering recipes from 80 famous chefs for soups from different cultures, she wrote a 208-page book in less than one year which includes the recipes and wonderful food photography as well as photographs of the refugees. One of the celebrity chefs, Roden, “hopes the book helps to keep the plight of Syrian refugees in peoples’ minds and that it will raise funds to alleviate their awful living conditions until their future is settled.”  (www.theguardian.com)

The wonderful thing about this for me is knowing that the Interlink Publishing Group has pledged that 100% of the proceeds from the book sold in the United States will go to fund the food relief efforts of the United Nations High Command on Refugees for Syria. There is a movement to get people involved in this project, found on the website soupforsyria.com. My hope is to organize a soup supper in my town – maybe many! – where the price of admission is the cost of the book that will be available at the event. I read this morning that the book is temporarily out of stock because of the great demand – which makes me happy and gives me time to get organized. A reprint is underway and new orders will be ready to ship in February, so I need to get busy.

I know that my efforts will not change the face of the refugee crisis in the world. But I will at least add my small piece to the solution, knowing that some of the Holy Innocents in our world will be fed!