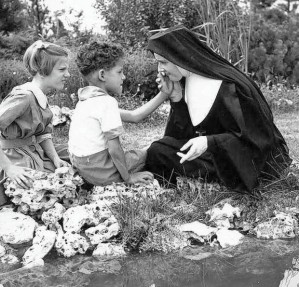 For most Sisters in my religious community, the past week has been one to be very aware of the word and character of perseverance. Just as is true for the young people who returned to school earlier this month, September marks the beginning of something. For the young, the next cycle or grade of education, while for us it marks the number of years in religious life. Some groups of us entered the convent on September 8th but for me and many others, September 15th turns the calendar and makes us wonder how another year could have gone by so quickly while we also give thanks for all that has been that has held us on this path. Not the least of the blessings is the example and witness of those who have come before us, both early in our history (since 1650 in France!) whose stories have been part of our “growing up” and those who are still with us “in the flesh.” I think of Sister Catherine, just past her 105th birthday, who climbed a mountain in the Adirondacks on her 97th birthday, just because she could. There is Gloria, somewhere close to 90 years old, passionate about justice and very attentive to national politics, especially this year. Often, when I visit our Motherhouse and step into the back of chapel for a quick “hello,” it is the Sister sitting up front whose identity escapes me from so far away but who inspires me to push on because I know she is praying with me.

Not the least in my thoughts are those who came on September 15th, 1966 as I did. We five who are still “here” are all “just us” – desiring to serve God in whatever way our lives unfolded, and I would venture to guess that all of us have been surprised at some of the ways that our call has evolved. It’s a mystery after all, as is the truth for all who have persevered in whatever lifestyle and work they have been called to do. It is a truth that is hidden in the words of Jesus in the parable of the sower this morning where he ends by proclaiming:…they are the ones who have heard the word, embrace it with a generous and good heart, and bear fruit through perseverance. (LK 8:15)