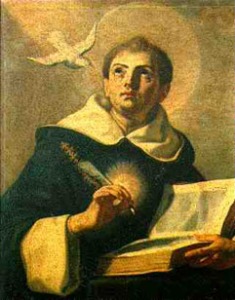 St. Thomas Aquinas is “by universal consent…the preeminent spokesman of the  Catholic tradition of reason and of divine revelation. He is one of the great teachers of the medieval Catholic Church, honored with the titles Doctor of the Church and Angelic Doctor.” (http://www.americancatholic.org) Thus begins a brief but interesting biography of the saint whose feast the Catholic Church celebrates today. The less well-known but, in my opinion, most important feature of his history is the last paragraph of today’s narrative. Even though Thomas was a brilliant philosopher and theologian, he came to realize the limits of what we humans can know or understand by reason. Here is the conclusion of the text:

“The Summa Theologiae, his last and, unfortunately, uncompleted work, deals with the whole of Catholic theology. He stopped work on it after celebrating Mass on December 6, 1273. When asked why he stopped writing, he replied, ‘I cannot go on…All that I have written seems to me like so much straw compared to what I have seen and what has been revealed to me.’ He died March 7, 1274.”

Blessed be those who come to the enlightenment that is far beyond anything we can ask or imagine! Blessed also those who surrender everything in bowing to that gift.