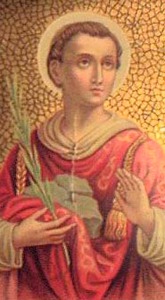 Since Christmas occurred on Friday this year, many people who work Monday-Friday have another day off, but the majority of laborers are back at their posts today (in addition to those who did not have a holiday yesterday). The lectionary readings don’t give us such relaxation, however, as they take us immediately from rejoicing to a consideration of what it means to be a disciple in a rather stark way. Today we celebrate the feast of St. Stephen, known as one of the first seven deacons to serve the needs of the growing Christian community (Acts 6). He is also the first martyr spoken of to die as a witness to faith in Christ. The lesson for me in this rather sobering feast is about consistency in reflection and practice as it leads to witness of faith. The Acts of the Apostles speaks of Stephen as a young man filled with the Spirit who “was working great wonders and signs among the people.” His detractors “could not withstand the wisdom and spirit with which he spoke” so they became enraged and ended by stoning him to death. Stephen is compared to Christ as an innocent who was put to death for speaking the truth. That courage does not come at a moment’s notice but must be developed from a deep inner knowing. I have often wondered if I would have the stability to witness even unto death were I to be challenged in such a radical way. I am lucky to live in a land and an era where freedom of religion is a right of all inhabitants so such courage would most likely not be demanded of me. If it were to happen, however, I hope that I could count on the words of Luke’s gospel this morning for my strength. Do not worry about how you are to speak or what you are to say. For it will not be you who speak but the Spirit of your Father speaking within you.