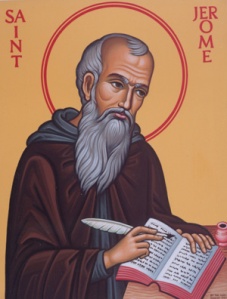 Today my Church celebrates St. Jerome who is the patron of librarians. I always knew he was the person who first translated the Bible into Latin but was astonished by a few facts that I learned as I checked on his birth date. I knew he lived quite early in the days of Christianity and found that his life span was from 345 to 420. What astonished me was that in order to do such a monumental work as the translation to Latin, he studied Latin, Greek, Hebrew and Chaldaic  – this over 1,000 years before the invention of the printing press! He did this by studying in his birthplace, Dalmatia (in the former Yugoslavia), Rome and Germany – where all the best teachers were. After this preparation he traveled all over Palestine, “marking each spot of Christ’s life with an outpouring of devotion” and spent five years in the desert of Calcis in prayer, penance and study. He finally settled in Bethlehem, where he lived in the cave believed to be the birthplace of Christ. This biography would be remarkable even in today’s world, but think what it must have entailed to accomplish what he did as well as the difficulty of travel in the century in which he lived!

We often hear or see the adage, “If you can read this, thank a teacher.” Today I would add thanks to librarians who dedicate themselves to facilitating our search for knowledge every day and to Jerome, tireless disciple of the Word of God, who gave himself totally to opening access to the Scriptures to so many people in the Western world in his day and in ours.

1 thought on “Thank a Librarian”