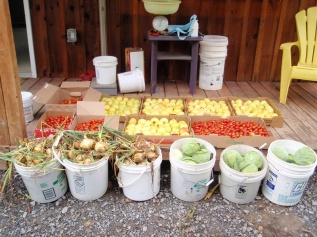 A photo of part of the 2013 harvest from the Matthew 25 Farm website.

Recently I read of an amazing project that has blossomed in Central New York, arising out of the increased need for food to stock pantries in the area. Two men became aware of the shortfall and had a dream for a farm to augment donations to the pantries with vegetables and fruit. They had no farming experience (although they were gardeners), no land, no money…but as they shared their dream, “the community embraced the idea” and they were “gifted with funds, land was donated and local farmers gave advice and help in the midst of their busy spring season.” The result was that, despite the weeds and some blight they were able to feed 40,000 from the yield. That was in 2009. If that were not edifying enough, the pictures of volunteers of all ages and groups in the years since (including busloads of students from Syracuse University Law School) convince me that team work really can save the world.

This morning, Paul is speaking to the Corinthians (1Cor 3:1-9), using a farming example to illustrate why the Matthew 25 Farm has been so successful. The inhabitants of Corinth are squabbling over which of their leaders is better, saying, “I belong to Paul” or “I belong to Apollos.” Paul sets them straight with the following images. “I planted,” he says, “Apollos watered, but God caused the growth. We are God’s co-workers; you are God’s field.”

Weeding, digging potatoes, harvesting corn and picking apples is hard work but you’d never know it from the smiles on the faces of those volunteers at Matthew 25. Doing for others is its own reward, especially when we do it together. And Paul’s last sentence is not to be missed either. If we are God’s field, we ought to make sure that we avoid getting all weedy and dried up. I think I’ll check on my moisture level today and the softness of my insides to see if I’m ready for those who might wish to help me grow in God’s name.